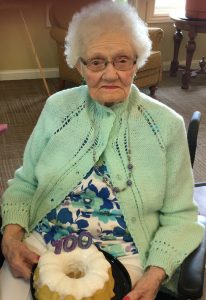 Margaret M. (Peg) Lauffer, 101 years old, died peacefully on June 30, 2018, at Whitney Cottage, Green House Living, in Sheridan. Born May 16, 1917, to Arthur William and Emma Jane Stewart in Seward, Nebraska, Peg had one younger brother, Roger Ashton Stewart. The two were orphaned when Peg was 11 and Roger 9, when their parents died six months apart. They grew up in the Masonic Home for Children in Fremont, Nebraska. In high school, Peg had the lead in operettas and musicals, because of a vocal range of four octaves and was an outstanding high school swimmer.

Peg attended the University of Nebraska for one year where she was a music major and finished her education by attending a business school. She married Henry E. Rohn, Jr. in December 1939 and they had one daughter, Anita Louise Rohn. World War II found Peg saying good-bye to both her husband and brother, both of whom returned safely. Hank went to the University of Wyoming on a GI bill and then on to U. of Nebraska, where he played in the 1941 Rose Bowl in Stanford, CA. As a guest, Peg sat a few rows behind Hedy Lamarr and Bob Hope.

After Anita started school, Peg began her career as a legal secretary, most often working for private attorneys. Divorced in 1952, she and Anita moved to Billings, Montana. in 1955 Peg married R.L. (Jack) Lauffer. In Billings Peg also worked for the Northern Hotel, before the couple moved to Great Falls, Montana, where Jack worked for ConAgra Company. The couple celebrated their 49th wedding anniversary the year Jack died in 2006.

In 2008 Peg moved to Kent, Washington, to be near her daughter Anita and Anita’s husband, KR Schamber. In 2009 she began residing with them and continued to do so when the family moved to Sheridan in 2012. After a major decline in health, she moved into the Green House Living in 2017.

Peg was a member of the First Congregational Church in Billings, Montana, active in the Order of Eastern Star, and served as Bethel Guardian of Bethel #7 of Job’s Daughters. Peg loved to sew, cook, play the organ, dance, bowl, and host dinner parties. She and Jack won several costume party events, as well as played Bingo frequently at the Elks Club and were members of Yellowstone Country Club in Billings and later Meadowlark Country Club in Great Falls. Over the years, her dogs were “family” to her: Dawn, Gidget, Dolly, Tina, and her last faithful companion, Peppie.

Peg was a true “survivor,” who worked hard and contributed to many charities, but especially loved sponsoring a child through World Vision, supporting St. Jude’s Children’s Hospital, and the Shriners’ Hospitals for Children. She loved family, friends, her animals, music, and sports…and a little gambling now and then. Her family appreciates the loving care she received at Whitney Cottage (Mary, April, Shannon, Bryce, Vida, Jodi, the nurses, and other staff) and especially Jason Otto, PA at Big Horn Mountain Medicine who brought a sparkle to her life.

A “Celebration of Life” will be held at the Bill Daniels Chapel on the Volunteers of America campus behind Landon’s Greenhouse on July 11, 2018, at 2 p.m.

Memorials to honor Peg can be made to the local Volunteers of America, attn. Nick Angeloff, 1876 S. Sheridan Avenue, Sheridan, WY 82801 or St. Jude’ Children’ Hospital in Memphis, Tn.

Online condolences can be made at www.kanefuneral.com.