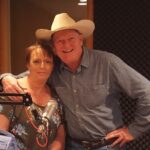 No crowds could be seen, but they most certainly were there… online from across the nation and other parts of the world.

Longmire Days 2020 looked a lot different due to COVID-19 concerns, there was plenty of music, laughter, and great conversations during 16 different “virtual” events.

The four-day event was organized this year by the Longmire Foundation and no less than 9 actors from the television series participated, several for the first time.

According to Longmire Author Craig Johnson, aspects of the virtual event will most likely be incorporated into next year’s Longmire Days.

In fact, organizer Jennifer McCormick had this to say at the conclusion of the 4 days of virtual Longmire…

For Robert Taylor, who portrays Sheriff Walt Longmire and the other actors, it was a great opportunity to visit with all the fans everywhere.

Because so many new fans were able to participate this year, next year’s 10th annual event that is expected to draw another large crowd to Buffalo in 2021.