They plan to tour Old Faithful Thursday before Pence speaks to employees about rebuilding infrastructure in U.S. national parks.

The visit comes a day after Pence appeared in Billings to campaign for Republican U.S. Sen. Steve Daines and speak about combating Montana’s methamphetamine problem.

The vice president heard stories of violence and child abuse linked to meth as he spoke with treatment providers, law enforcement, tribal officials and recovering addicts in Billings.

Daines, a first-term senator, is running for re-election next year. Helena Mayor Wilmot Collins is the first Democrat to run against him.

They stressed that meth is a far bigger problem in Montana than the opioids prevalent elsewhere in the nation.

Pence pledged the administration’s support in confronting the issue.

He was to attend a private fundraiser for Daines at the offices of Lonewolf Energy. The oil company’s founder, Talbert “Trent” Sizemore, has long been a financial supporter of Daines.

The vice president’s two-day trip also includes a private fundraiser at a business in Billings for Montana Republican U.S. Sen. Steve Daines, who is up for re-election next year.

Pence is to meet with law enforcement officials and drug treatment providers Wednesday at RiverStone Health Clinic in Billings before delivering remarks about the administration’s efforts against drugs. 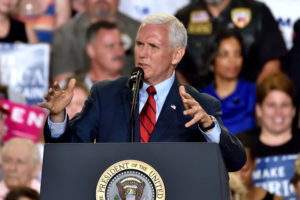