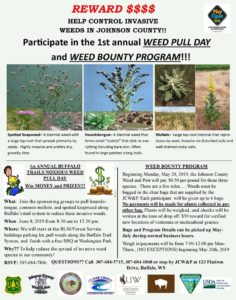 Rod Litzell of the Johnson County Weed & Pest Department reported that 35 people took part in the event and 836 pounds of Spotted Knapweed, Hound stongue, and Mullein were collected along the trail system.

The “pull day” was co-sponsored by Johnson County Weed & Pest, the US Forest Service, BLM, UW Extension, and Clear Creek Conservation District along with the Trails System.

The bounty program will continue as long as funds are available or until the weeds go to seed later this summer.