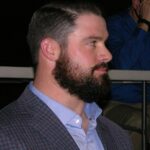 John Camino was sworn in yesterday afternoon as the newest member of the Buffalo City Council.

Councilman Scott Madsen was also sworn in for his second term during the council’s first meeting of the year.

Camino replaces Travis Lawrence who chose not to seek re-election in 2020.