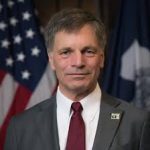 In other news, Governor Mark Gordon has issued a statement in response to a decision by the United States Supreme Court not to hear a challenge to Washington State’s unconstitutional discrimination against a proposed coal export terminal.

In the statement, the Governor told the Supreme Court…“It is extremely frustrating that the U.S. Supreme Court failed to grant a hearing on the critical issue that this case raised. At some point the nation will have to figure out whether it expects to grow business or just to restrict it.

This case was never about a single permit or product. It was about the ability of one state to engage in lawful interstate commerce without the interference of another state. Today it is coal, tomorrow it could be agricultural products or any of our state’s abundant natural resources. At some point the Supreme Court is going to need to take on this matter.

From day one of my administration, I have fought to protect Wyoming’s abilities to bring its commodities to market, be it coal, trona or any of our state’s products. I remain committed to continuing our efforts to export clean coal to assist countries in meeting their energy needs and climate goals.”