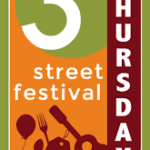 The Virtual 3rd Thursday Street Festival and Concert Series has been cancelled for the remainder of the season.

Earlier this summer, the 3rd Thursday Street Festival Committee made the difficult decision to cancel the physical street festival held in downtown Sheridan.

Instead the committee hosted a 3rd Thursday | Virtual Concert Series on Facebook Live.

The Craft Brothers kicked off the summer in June and Sidetrack performed in July.

Although there are still two more months of summer, the series has been cancelled for the remainder of the season.

It appears certain that the popular 3rd Street Festival will return in 2021.