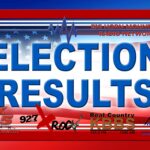 Converse County Commissioner Robert Short was a distant second with 18% of the votes.  Sheridan’s Bryan Miller was third with slightly more than 7% of the votes.

In Johnson County, the surprise of the primary balloting was Barry Crago’s victory over incumbent District 40 State Representative Richard Tass.  Crago received nearly 60% of the votes in the county.  Crago will be unopposed in the November balloting.  Tass was elected two years ago after veteran Representative Mike Madden chose not to seek re-election in 2018.

Buffalo City Councilman Scott Madsen and David Iverson received the highest vote totals in city balloting and both appear to be shoe-ins for council seats after challenger Zac Sexton withdrew from the race last month.

Voters supported the creation of a Senior Citizen Service District by a margin of 67.8% to 32.2%.

In the Sheridan City Council race, Kristien Jennings, Steven Brantz, and Shawn Day had the most votes.

In the balloting for Sheridan County Commissioner, Tom Ringley and Lonnie Wright were fist and second respectively.