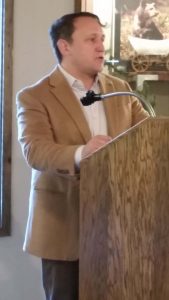 A bill that would restrict counties control over the establishment of private schools has passed the House in its second reading and the third and final reading was scheduled for today.

Senate File 49 was authored to allow the Foster Friess family to build and operate the Jackson Hole Classical Academy in a rural area near Jackson.

Teton County prohibits construction of buildings as large as the one planned for the academy.

State Representative Mark Jennings of Sheridan opposed the bill and called for parity among schools recalling that Wyoming is the Equality State.