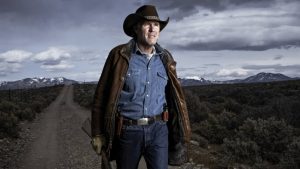 The charity was named by the Longmire cast to receive the proceeds and the amount raised came from props, western hats, and even the shirt off the back of Robert Taylor aka Walt Longmire for $16,000.

Special Wyoming Whiskey bottles were also part of the auction and the number one bottle was purchased in the auction by Scott Biondo, who will now be written into one of Craig Johnson’s mysteries as a result of the successful bid.