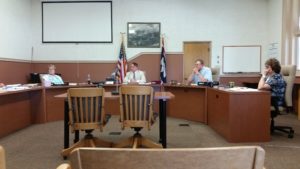 The Johnson County Commission approved an amendment to its Department of Corrections contract on Tuesday, allowing for payment of $60 per day for each inmate housed at the Justice Center.

A second amendment is forthcoming and for Sheriff Rod Odenbach, it’s a matter of getting more than one asked for…

These inmates will participate in an Intensive Out Patient Program that requires a minimum of 90 minutes of counseling per day.

In other Commission business, County Assessor Deb Robinson informed the board that recent tax corrections have lowered the valuation by slightly more than $11,500 or less than a half percent of the county’s total valuation.

She reported that several of those corrections were for personal property that had never been taxed.