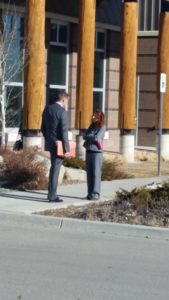 Former Buffalo Chamber CEO Angela Fox was sentenced to 2 to 5 years for each of 3 felony counts of theft in District Court this afternoon.

All three sentences are consecutive and suspended with the exception of 90 days of incarceration.  That means that she will serve only 90 days of incarceration in the Johnson County Detention Center but will have a combined 6 to 15 years sentence should she violate any aspect of her sentence.  She will also be on probation for 10 years based on her ability to pay restitution in the amount of $16,601. 09.  This restitution amount covers the theft of $8,600 and the cost incurred by the Chamber to determine the amount stolen.

Fox expressed deep sorrow for her actions and asked the court for forgiveness.  She told Judge William Edelman that she had been scared and frightened throughout the trial, especially fearful of leaving her children if she was ultimately incarcerated.  She told the judge that she was deeply sorry for what she had done and asked for his forgiveness.  Edelman reminded her that “forgivenss” was not in his job description before announcing her sentence. 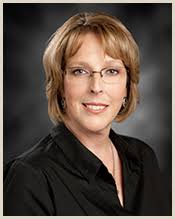 Chamber Board member Cindy Kremers, who played an integral part in establishing the amount of the theft, had this to say following the sentencing…

County Prosecutor Tucker Ruby had requested a sentence of 4 to 7 years for each count to be served concurrently.  In his pre-sentencing remarks, Ruby spoke of the severity of the theft in terms of her violating the organization’s trust in her as the CEO.  He also spoke of her failure to accept responsibility for her actions before and during the trial.  He characterized her actions during the repeated unauthorized use of the Chamber funds as “callous” and that she made repeated efforts to “hide” what she had done.  Ruby also alluded to her civil lawsuit against members of the Chamber board as an effort to escape any legal requirements to repay what she had stolen.

Fox’ attorney, Devon Peterson sought probation for his client.  He spoke of the entire case as being “emotionally intense” and suggested that Fox had excelled in her duties as Chamber CEO, citing a number of initiatives that she had created.