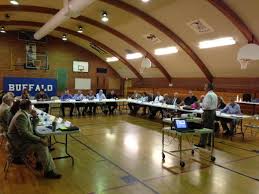 According to Knapp, the survey was highly supportive for maintaining the facility as a community resource…

Of the 936 responses, 75% believed the civic center was either valuable or extremely valuable.

More than 80% of those responding supported the center as a multi-use facility.

Improved drainage, additional parking, expansion of the college campus, and updating the second floor were each supported by more than half of the responders.

Most surprisingly, more than two-thirds supported using public funds to operate the facility.