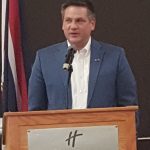 During Sheridan County Chamber of Commerce Legislative Recap on Wednesday, Senator Bo Biteman spoke of a number of bills that were passed during the 66th general session such as the Voter ID bill and the Born Alive bill.

One of the bills that failed was support for an Article 5 Convention of States.  SJ2 was sponsored by Biteman and failed in the Senate by a slim vote of 14 to 16.  Biteman spoke of how a COS is crucial in setting term limits for members of the United States Congress…

A Convention of States can only occur when 34 states support such an effort.  Aside from Congress itself passing amendments to the Constitution, the only other way an amendment limiting the size or scope of the government or the setting of term limits can occur is through a Convention of States.

To date, 15 states have already adopted Article 5 legislation in their state legislative process.