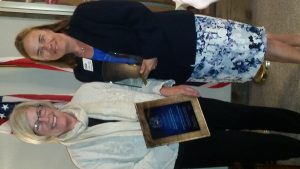 Karen Hostetler, president of Buffalo’s Mountain Meadow Wool, was honored by the Small Business Administration at the Chamber luncheon on Wednesday.

Hostetler told the luncheon attendees that the mill processes 20,000 pounds of wool each year…

She also announced plans for daily weekday tours of the mill during the upcoming tourist season.