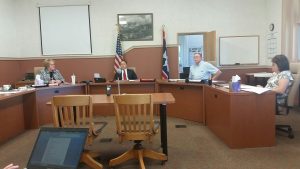 The Johnson County Commission approved its final budget for the 2017-18 fiscal year during yesterday’s meeting.

The general fund totaled just over $14.6 million, with total appropriations set at slightly more than $51.8 million.

Not surprisingly considering the plight of school funding in the state, the mil levy set for the Johnson County School District #1 totaled a whopping 44.5.