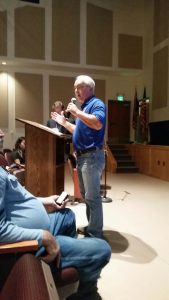 As part of the Wyoming Legislature’s effort to reassess the state’s school funding model, one of four public meetings were held last night at Buffalo High School.

Augenblick, Palaich and Associates, conducted the meeting that focused on two issues, the current funding model and the so called “basket of goods” available to the state’s students.

Those attending, primarily consisting of educators, told the consulting firm the course offerings available to students should not be reduced and that the funding model isn’t broken.

In fact, Fremont County educator Terry Snider told APA that it was the “funding” of the model that was broken.

The PA’s final reassessment report is due to be completed in mid-January, just prior to the Wyoming Legislature’s budget session.