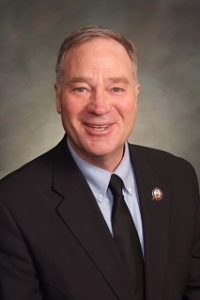 A “who’s who” of community leaders gathered at the Johnson County Healthcare Center yesterday morning to discuss the VA Skilled Nursing Facility that is set for the outskirts of Buffalo.

Commissioner Bill Novotny, City Councilman Travis Lawrence, and State Senator Dave Kinskey met with new hospital CEO Sean McCallister in an effort to work together in setting the course for the future project at Fort McKinney.

The hospital had been a vocal critic of Kinskey’s comments during the legislative debate in the passage of bill bringing the facility to the Buffalo area.