SHERIDAN, WY— The Sheridan City Council continued to debate on the position of the City Administrator at their meeting on Monday night.

Charter Ordinance 2202, which defines the powers and responsibilities given to both the City Administrator and the Mayor, has become a highly debated topic with City Council in recent meetings. Mayor Roger Miller, a strong opponent of the City Administrator position, said he fears the position strips too much power away from the Mayor and Council.

Other members of Council expressed support for the position, saying it frees up the Mayor from day-to-day responsibilities which would allow for more time to focus on creating policy that would benefit the city. Counselor Jacob Martin said he didn’t think the position diminished the role of the Mayor.

Previous Mayors including Senator Dave Kinskey have spoken in support of the City Administrator position, however, the opinion of the public has been mixed, with many fearing that the position removes the accountability an elected official has to the public and gives too much authority to a non-elected city employee.

The final reading of Charter Ordinance 2202 will be at the next regularly scheduled city council meeting on July 1st. 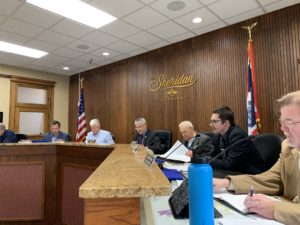