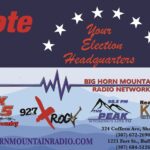 What is remarkable about this primary election was its record voter turnout.

According to Secretary of State Edward Buchanan, the results of the state-level races across the state had the highest turnout ever for a primary in a presidential election year.

He also stressed that the state was successful in making “polling places safe and worked hard to inform voters about the security and safety of Wyoming’s voting process”.

140,042 ballots were cast in the 2020 Wyoming Primary Election. The last primary election that surpassed this number was the 1994 Midterm Election. 62 percent of ballots, or 86,441 votes, were cast at the polls on election day or by in-person absentee, the rest were cast absentee by mail.