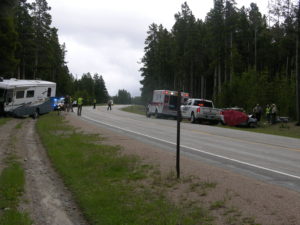 Update: The victims involved in Monday’s two-vehicle accident on Hwy 16 west of Buffalo have been identified.

75 year-old Roger Dean Dubs was fatally injured as the driver and only occupant of a 1998 Honda Oddessy mini van.

79 year-old Phil Willingham and 72 year-old Maureen Randall were both transported to the Johnson County Healthcare Center for non-life threatening injuries.

The accident involved a passenger car and motor home in an apparent head-on collision.

There is at least one fatality resulting from the crash.

At least two individuals were transported to the Johnson County Healthcare Center.

The names have not been released pending notification of the families.

No additional information is available at this time.