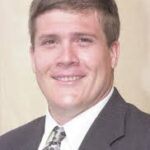 Sheridan has a new police chief!

Koltiska is a 19-year veteran of the department and currently serves as the Support Services Bureau Commander, overseeing the Criminal Investigations Division.

The process to determine the final 5 candidates included a series of interviews by Prothman Consulting Company, a number of personality tests, and the involvement of two separate community panels.

A formal swearing in for Koltiska will be held at the next regularly scheduled City Council meeting.