Some Surprises in Local Candidate Filings 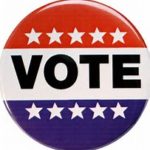 Last Friday was the deadline for filing for candidacy of elected offices in Wyoming and locally, there were a few surprises.

In Johnson County, Buffalo City Councilman Travis Lawrence decided not to seek reelection when his term expires in December.

In the City of Sheridan, Council President Richard Bridger will be running against Mayor Roger Miller as the latter is seeking a second 4-year term.

The primary election for both Johnson and Sheridan Counties is set for August 18th.