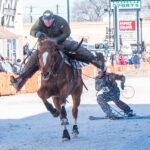 The Sheridan WYO Winter Rodeo originally scheduled for late February has been cancelled.

According to a press release on Monday, much deliberation took place with representatives from Sheridan County and the City of Sheridan with consideration to the rising number of COVID-19 cases in the community and across the region, as well as the current Sheridan County Public Health orders.

According to Shawn Parker, Executive Director for Sheridan Travel & Tourism, the organizers felt there was simply no way to effectively social distance or keep safe the more than 10,000 people who have come out for the event each of the first two years.

In the press release, Parker stated that causing a mass-infection event, and then forcing the closure of dozens of downtown businesses, would be absolutely devastating to our local economy and healthcare systems, and completely irresponsible.

Plans are in place to bring the event back to the community in 2022.

While the skijoring event in Sheridan has been cancelled, the Johnson County Ski-Jor Wars is still a go!

It’s a much smaller event than the one held in Sheridan in the past and the organizers have already received authorization from the Johnson County Public Health Officer, Dr. Mark Schuler.

The layout for the horse-drawn competition is conducive for social distancing for the spectators and according to Todd, the size of the crowd will be much smaller than the 10,000 that have attended Sheridan’s Winter Rodeo in the past…