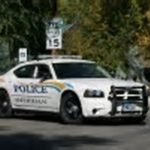 On Friday, it was announced that Sheridan Police Chief Rich Adriaens will soon be retiring after 37 years in law enforcement.

The announcement came from City Administrator Stu McRae, indicating that no set date for his retirement has been announced.

Adriaens has spent the last 10 years as the Sheridan City Police Chief.

In his press release, McRae said that “Chief Adriaens leaves a phenomenal legacy in the policies and procedures he has put together over his 10 plus years on the local force and his leadership will be missed.  Rich is one of the voices that I have looked to for guidance and counsel as I have begun my tenure as City Administrator and I will miss him greatly”.

The City will begin a search for a new chief this week with plans to begin the search internally.

According to Adriaens’ letter to the city, he is eligible for retirement on August 21st of this year.

He was hired in 2010 after participating in a search committee for a Sheridan Police Chief while serving as Chief of the Gillette Police Department.