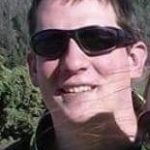 Dennis Gresham,33, of Sheridan was found in a van that had been involved in a pursuit by law enforcement after two suspects fled the scene.

One of those suspects was a female who was apprehended by authorities.  The second suspect, a male, broke into a private residence in the Billings area where a 9-hour standoff ensued before he was killed after opening fire on law enforcement officer at the scene.

The van involved in the crime spree was owned by Gresham and his wife Meghan who notified authorities of her husband’s disappearance after he failed to check in with his work on Monday. Morning.

Gresham left early Friday morning with the intent on picking up a friend from the airport on Friday and camping at the Yellowstone River Campground.

According to Gresham’s wife, surveillance video from the campground that shows a man and woman approaching the van and eventually getting in as the van drove away.

His wife became concerned when her husband’s friend called from the airport later that day and telling her that Gresham was not there to pick him up.

The deceased is survived by his wife Meghan and two young boys.

The female suspect has not been identified and is in law enforcement custody.