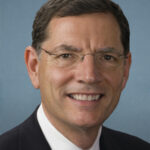 In the statement, Barrasso said this: “On Inauguration Day, we heard President Biden rightly encourage the American people to strive towards unity. A week later, he is signing a divisive and illegal executive order that would damage Wyoming’s economy and the economies of other states like New Mexico, North Dakota and Louisiana.”

“Despite all the hot air from climate alarmists, banning new oil, gas, and coal leases on federal land and waters will do nothing to address climate change. Energy producers will simply go elsewhere – likely out of state or overseas.

The president’s order will deprive thousands of people in Wyoming of their jobs and a principal source of revenue for public education and other essential services. If President Biden is serious about bringing our country together, he needs to understand that actions speak louder than words.”