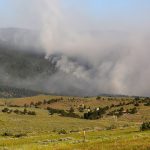 Yesterday, firefighters’ focus was on patrolling and monitoring for heat along segments of contained fireline in all divisions. They are looking for and extinguishing any sources of heat within one chain (a unit of measure equal to 66 feet) toward the fire’s interior.

Crews expect to wrap up structure assessments today and will submit a report to Johnson County for future fire suppression planning.

The northern edge of the fire perimeter is holding along the edge of a cliff band and the bottom of Robinson Canyon. These are natural features that impede the fire’s advance, and areas that are unsafe for firefighters to be on the ground. As a result, it has been determined that the 64% of the fire perimeter that has been contained is the full extent of achievable containment.

The fire is exhibiting minimal fire behavior – creeping and smoldering in most areas, with occasional torching of single-trees or groups of trees well inside the fire’s interior. This is expected to continue for the foreseeable future as the fire continues to consume unburned fuels. Smoke may be visible in the area, at least occasionally, as long as residual heat and available fuels remain.

With reduced fire activity and diminished threat to local communities, several fire crews have been demobilized. The two Type 1 helicopters have also been released from the Robinson Fire, as their support is more urgently needed on other fires. Aerial resources that remain committed to the Robinson Fire include the Type 3 helicopter, the National Guard medivac hoist ship, and the fixed-wing Air Attack. These aircraft are also available to assist with initial attack or to support other fires in the area.