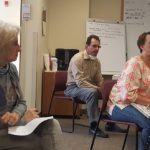 Yesterday, it was announced that the “in-person” Longmire Days events have been canceled due COVID19 concerns.

The announcement was made by Jennifer McCormick and Judy Johnson in a meeting held at the Johnson County Emergency Operations Center.

The 4-day event that annually draws 8 to 10,000 visitors to Buffalo had been scheduled for August 13-16 of this year.

With the cancellation of the “in-person” events, plans for virtual events are still moving forward according to McCormick…

No actors will be present for a virtual auction to be held at the Occidental back yard on Friday, August 14th or for a pig roast at the TA Ranch the following day.

Tickets will be sold for both of the local events and will be limited based on health restrictions established by the Wyoming Board of Health.

McCormick made it clear that those attending auction in person must still submit bids online in competition with bidders from other parts of the country.

The announcement has disappointment for the thousands of Longmire fans who had planned to attend this year, but the foundation expects the live events to return next year for the 10th Anniversary of Longmire Days in Buffalo, aka Durant, Wyoming.