Legislators Not Happy With Bid Process for Occidental Petroleum 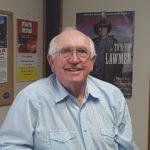 Local legislators are not happy with Governor Mark Gordon’s plan to bid on Occidental Petroleum’s huge land and mineral offering.

Last week, Mark Kinner and Mark Jennings both expressed reservations not only on the proposed purchase but also on the Governor’s method of financing the state’s bid.

Once the Wyoming State Land and Investment Board has given its support for the state to submit a bid for Occidental Petroleum’s land holdings, the Governor has chosen to use the state’s Permanent Fund to pay for the purchase if Wyoming’s bid is successful.

One of them is District 40 Representative Richard Tass…

During the special session in early June, Gordon vetoed the legislature’s attempt to set parameters for the state’s bid, angering many of the state’s lawmakers.

Going forward, there may be hard feeling regardless of the outcome of the bid process.