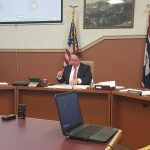 The Johnson County Commission accomplished something that the 66th Wyoming State Legislature failed to do during its ongoing general session this year… that is to pass a resolution preserving a citizen’s 2nd Amendment Right to bear arms.

During the Commission’s meeting yesterday morning, a resolution was unanimously passed to identify the county as a 2nd Amendment Preservation County.

The Wyoming State Legislature failed to pass the 2nd Amendment Preservation Act in recent days even though the bill had considerable grass roots support.

SF81 passed the Senate on a vote of 24 to 6 but was never introduced onto the floor of the House of Representatives.

Here is the full Resolution passed by the Commission: