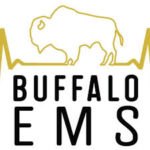 The vote was anticlimactic to say the least.

Last month, the board had voted 3 to 2 to spend $500K in reserves to build a new ambulance building and to advertise for new ambulance service to replace the current service provided by Buffalo EMS.

The result was a firestorm of opposition to both decisions with much of the support directed to renewing the longstanding service with the Buffalo EMS.

Much of the opposition was posted on social media on a Facebook page created specifically in support of Buffalo EMS.

According to Crago, the contract is “99.9% complete”, with insurance coverage being the primary issue to be resolved.

The board voted to approve the contract, pending an update to the wording involving insurance.

With the vote, it was mutually agreed that the board and the Buffalo EMS would considering any previously discussed releases of liability from both parties.