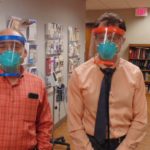 Hospital CEO Sean McCallister made that announcement yesterday afternoon during a press briefing.

During the same briefing, Dr. Mark Schueler made the case for area residents to don face masks while in public…

McCallister also announced that the blood draw originally scheduled for April 20th has been cancelled.

The event was cancelled due to an adequate supply of blood as elective surgeries have been postponed until a later time.