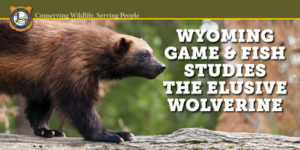 SHERIDAN, WY— Join Game and Fish Nongame Biologist Nichole Bjornlie on Wednesday, Sept. 18 at 7 p.m. in Room 201 at the Sheridan College Mars Agriculture Center to learn about the ecology and history of the wolverine.

Wolverines have long been popular in mythology, as sports mascots and recently, as the well-known star of a popular Marvel comic. But despite their popularity, wolverines are rarely seen and little is known about their status and distribution in Wyoming, which lies at the southern edge of their continental range.

In 2015, Idaho, Montana, Washington and Wyoming, with support from the Western Association of Fish and Wildlife Agencies, initiated the Western States Wolverine Conservation Project. Bjornlie will discuss results of the project and answer questions about these secretive animals.