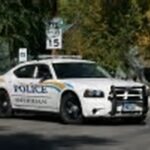 The Sheridan Police Department has received a report of a scam in which a suspect has claimed
to be an officer within our department.
The suspect called using a fraudulently generated phone number which initially mimicked the
Sheridan Police Department’s non-emergency telephone phone number (307-672-2413).
The suspect stated the victim’s business was under investigation for receiving fraudulent
currency. The victim fell prey to the scam and followed the suspect’s demands that the victim
purchase gift cards and to electronically transmit the gift card information.
The identity of the victim or business will be withheld for purposes of privacy.
The Sheridan Police Department would like to remind the public that Sheridan Police
Department officers will never request the electronic transfer of currency in any form. We would
like to also remind people to never provide their personal information to anyone they do not
know or trust.
If anyone is contacted in a similar manner, we request you report it as soon as possible. This case
is currently under investigation. Thank you for your continued support