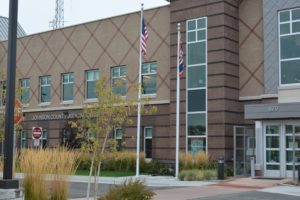 Found guilty on three counts of felony theft in January, Fox and her attorney sought a new criminal trial citing alleged bias on the part of Judge William J. Edelman.

Campbell County District Court Judge John Perry found no evidence of bias and returned the case back to Johnson County earlier this month.

On January 16th, jurists deliberated for less than an hour before finding Fox guilty.

Sentencing is scheduled for 2:30pm on Tuesday, May 13th.