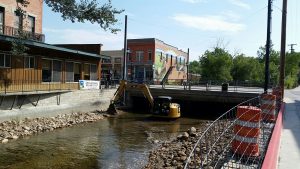 Work began Wednesday on the cantilevered walkway along Clear Creek in Buffalo.

The walkway will run along Fetterman Street between Main Street and Western Avenue and will finally connect the two parts of the Clear Creek Trail System.

Work on Lobban Avenue was completed earlier this month and the walkway is the final piece of the Lobban Avenue Project that began in the spring of 2016.