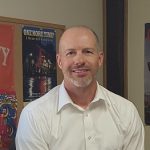 After just two years at the helm of the Johnson County Healthcare Center, Sean McCallister has submitted his resignation as CEO.

McCallister has accepted a position with an ambulatory center in Idaho and will be moving closer to family as a result of the move.

He has overseen a number of major improvements in Buffalo’s hospital, such as enhancing operational efficiency, improving billing and reimbursement, and eliminating discretionary expenses.

The center has also upgraded to 3D mammography, transformed its physician staffing and created a hospitalist program.

But it was his leadership during the COVID-19 pandemic that is considered his most impressive achievement as CEO.

McCallister had this to say about the challenges the hospital faced during much of 2020, specifically as it relates to Amie Holt Care Center…

McCallister will continue in his role as CEO for the next few months and assist in providing a smooth transition once his successor is chosen by the Johnson County Healthcare Center’s Board of Directors.