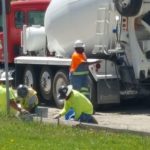 Street work is progressing in Buffalo this week and there’s a good possibility that the Fetterman Project will be done by the opening of the city pool.

Most of the work in recent weeks by Barnum Construction has been on Burritt Avenue between Angus and Fort Street, as well the intersection at Klondike and Fetterman.

During last week’s City Council meeting, Nelson Engineering’s Brent Bennett was hopeful that Burritt would be finished to the Clear Creek Bridge and completed to Fort Street by the end of this week. 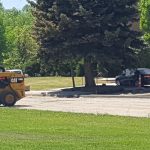 With current weather conditions, it appears that Burritt Street work will be completed just in time for the opening of the city’s outdoor pool scheduled for on or around June 16th.

Work is also progressing on completing the intersection at Klondike and Fetterman by next week.

More street work is set to begin on Flat Iron Drive as early as this week and Barnum Construction is under contract for this project as well.