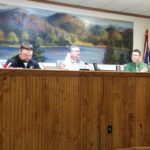 The Buffalo Wells Project is moving forward after the city council accepted one of four bids received in the amount of $68,535.

A number of wells will be drilled during the first phase of the project that ultimately provides a backup waters supply for the City of Buffalo.

Council-member Dan Hart and Mayor Shane Schrader stressed that the bid from Dan Hart Patrol has nothing to do with the council member.

Once the wells are drilled west of the city, a second phase of the project will provide for the installation of a pipeline to the city’s water treatment plan.

Currently, the primary source of water for Buffalo is the Tie Hack Reservoir.

In other actions at the Buffalo City Council meeting, the council approved the following Mayoral appointments: George Korhal to the Mountain Plains Heritage Park, Keith Gliner and Ed Von Holst both to the Trails Board.