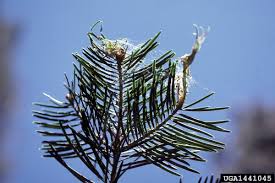 Western Spruce budworms are adversely impacting Douglas fir trees in southern portion of the Bighorn Mountains in a very dramatic way according to the state’s Forestry Department.

Wyoming Forester Kelly Norris told the Johnson County Commission on Tuesday that the damage is irreversible and will dramatically change the landscape in the southern part of the mountain range.

The budworms are causing heavy defoliation in approximately 12K acres and the effect is considered of an epidemic nature.

Norris told the Commission that the department is opting for a large-scale thinning over the next two years in response to the ongoing damage and are seeking additional staffing to handle the effort.

Eradication is through aerial spraying is not possible due to private landowners and the fact the insect is native to the area.