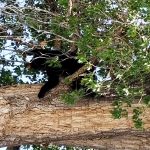 Sheridan – On June 9, at approximately 11:30 a.m., Wyoming Game and Fish Department personnel immobilized a black bear in Sheridan on Wednesday morning near 5th Street and Spaulding. 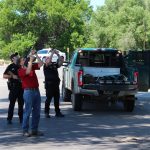 The bear, an adult female, had been reported at several locations in Sheridan over the past several days. Personnel responded to each report, but had been unable to capture the bear.

The bear is estimated at four years of age and was in healthy condition. She was relocated to a remote area in Sheridan County.

“Game and Fish thanks the Sheridan Police Department and Animal Control for assistance and traffic control, providing a safe area to immobilize the bear,” said Christina Schmidt, Sheridan Information and Education Specialist.

“Most of Sheridan County is considered bear habitat and there is always the potential for bears to move through or near communities such as Sheridan, Story, Dayton and Ranchester,” added Schmidt. “The public can help prevent potential conflicts with black bears and other wildlife by securing garbage and other attractants such as pet food, livestock and poultry feed and barbecue grills inside a building.”

Any sightings of bears in residential or developed areas should be reported as soon as possible to the Game and Fish Regional Office at 307-672-7418 during regular business hours or to a local law enforcement agency.