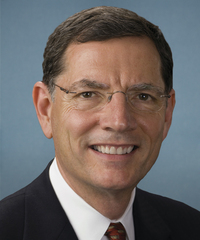 Even though the Congressional effort to repeal and replace Obamacare failed to bring about new legislation, Senator John Barrasso was pleased with President Donald Trump’s Executive Order to “fix” some of the more serious issues of the nation’s healthcare problems…

Barrasso also praised the President for extending coverage on short-term plans for individuals who are between employment opportunities… from 90 days to now a full year.

Senator Barrasso was a guest on the KBBS Morning Show late last week.