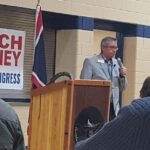 Wyoming State Senator Anthony Bouchard of Goshen completed a whirlwind tour around the northeast part of the state over the past weekend in his early bid to contest Congresswoman Liz Cheney in the 2022 primary election. 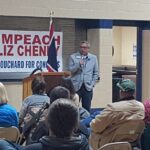 Bouchard had announced his bid after Cheney angered many across the state when she voted in favor of impeaching former President Donald Trump.

According to Bouchard, his campaign is close to his goal of raising a quarter of a million dollars by the first reporting quarter and intends to continue campaigning across the state until the August 2022 primary election.