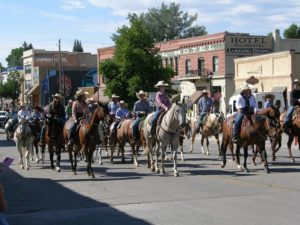 Leading a large contingent of horseback riders at the front of the 2019 Johnson County Fair & Rodeo Parade on Saturday was Grand Marshal Amanda Kaufman.

Kaufman was chosen and grand marshal by two young girls as part of their leadership project and for their appreciation of her four decades of service in leading the 4H equine program.

She exemplified the theme of the parade: Women of Wyoming.

Some of those riding with Kaufman were family members from as far away as California.

The parade consisted of 52 entrants and drew a large crowd on a beautiful Saturday morning along Main Street in Buffalo.

Big Horn Mountain Radio will have the results of the float competition in a later broadcast.