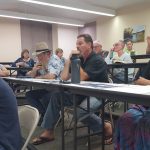 Rick Myers, chairman of the KBJ Joint Powers Board spent nearly two hours outlining the proposal to improve and maintain 9 taxpayer-owned facilities in Johnson County, as well as fielding a large number of questions from an audience of nearly 40 local citizens. 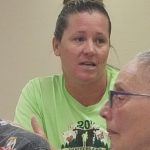 After listening to the details of the proposal that is set to go before voters in the August 17th primary, an unnamed mother of young children had this to say…

According to Myers, more public meetings will be held over the next 8 weeks in an effort to inform area citizens of the importance of establishing a 1-cent sales tax needed to fund the maintenance and improvements of the Johnson County Fairgrounds, the Buffalo Golf Club, the city’s pool at the YMCA, the Buffalo Senior Center, the Gatchell Museum, the Kaycee Library, and the Harold Jarrad Park.