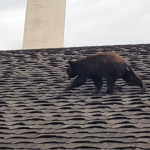 Sheridan – At approximately 7:30 a.m. on June 20, 2021, Wyoming Game and Fish Department personnel captured a black bear on the east side of Sheridan near the Holly Sugar building. With assistance from the Sheridan Police Department, personnel followed the bear along Little Goose Creek until it eventually climbed a tree and accessed the roof of a business, where they were able to immobilize it.

The bear, a male estimated at two years of age, was healthy and in good condition. It was later released in the Bighorn Mountains.

“A jogger reported seeing the bear a little before 6 a.m.,” said Sheridan Wildlife Biologist Tim Thomas. “Because he had likely not been in town for long and we have no reports of him accessing garbage or other food rewards, he was a good candidate for relocation. We appreciate the public for notifying us quickly of bear sightings or suspected bear activity near residential areas as that gives us more management options.”

Any sightings of bears in residential or developed areas should be reported as soon as possible to the Game and Fish Regional Office at 307-672-7418 during regular business hours or to a local law enforcement agency.