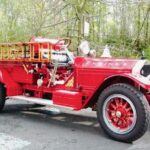 It’s taken years of effort on the part of Sheridan Fire Department Chiefs, past and present, but a piece of the city’s history will be coming home.

A 1919 American LaFrance Fire Engine was found more than 2000 miles away and the efforts on the part of past Fire Chief Edgar Fack and current Fire and Rescue Chief Gary Harnish are credited with bringing it home.

According to Day, Fack’s efforts to purchase the fire engine actually began in the mid-1990’s.

The city will cover the insurance on the purchase and the fire truck will be located at the Sheridan Fire-Rescue building along with other items of historical significance… an 1890s fire cart and a 1940s fire engine.